USAHockey's Harry Thompson wrote the article, Close to Home,  in the September 2018  issue that brings to light many of the thoughts and concerns the FVHA has on youth hockey. Please take a chance to become familiar with why we chose to adopt these ideas for the Yeti League. 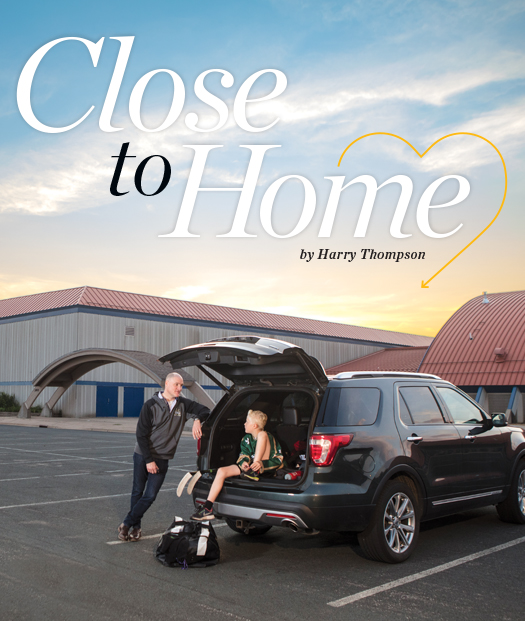 As Tom Farrey crisscrosses the country talking about the good, the bad and the ugly of youth sports in America, he often holds up USA Hockey as the gold standard of what can happen when a national organization and grassroots volunteers work together.

"Other sports need an example of an NGB [national governing body] and people at the community level who are embracing reforms that make the sport a better experience for kids," the executive director of the Aspen Institute's Sports & Society program told a packed house at USA Hockey's recent Annual Congress.

In the next breath, Farrey challenged those in the room to think about the next stage of the game's growth and development. And the answer he proposed was a return to the game's roots by bringing the hockey experience closer to home with a renewed emphasis on creating and supporting house league programs.

Farrey called house leagues a "treasured American institution" that many have forgotten due to a common misconception in all youth sports that equates opportunity to money paid and miles traveled even at a young age.

"As a parent, it could be tough because you don't want to deny your child opportunities," Farrey said. "But we have to really think about what we really want sports to do for our children."
An ardent supporter of USA Hockey's American Development Model, Farrey said that starts with finding out what's important to a kid and not just the parent holding the checkbook.

"If you listen to kids, they would prefer to play with classmates in an experience where fun is the priority," he said in reference to studies conducted by the Aspen Institute's Project Play initiative. "Certainly, at the 12 & Under level, kids need that social experience, and house leagues have been great at fostering that."

It's not just the kids who will benefit. Vibrant house leagues can provide an economic boom for rink owners while creating a feeder program for other levels of the association, including its adult leagues.
"Clubs and programs need to be thoughtful and intentional about recreating these structures because if they do so, it ultimately is going to serve more kids, it's going to provide long-term consumers of ice time, and keep more people playing into adulthood," Farrey said.

These ideals have not gone unnoticed at the NHL level where the league and its member clubs are starting to see the virtues of house league programs for keeping more kids in the game, which ultimately translates into more fans of NHL teams.

"You're already seeing some of our teams create this path because these teams are realizing that this is their future, and these are their future fans," said Matt Herr, the NHL's youth hockey regional director.
The New York Rangers, Dallas Stars and Los Angeles Kings already have programs that encourage more kids to stay close to home, learning the game and having fun. And if one day they decide to make a bigger commitment to join a travel team they will be armed with the skills and love of the game to go as far as they can possibly go.

"People want it. It's just a matter of being able to sell it and promote it," Herr said. "There's nothing wrong with recreation hockey, but like anything else it has to be marketed and promoted the right way."

Part of the process comes with changing the stigma that house league hockey somehow provides less of a true hockey experience or is only for those players who lack the skills and commitment to play the game.
According to the State of Play report put out by the Aspen Institute in 2016, "house leagues can be stigmatized as inferior, a casualty of tryout-based, early-forming travel teams that cater to the 'best' child athletes."

"House leagues or rec leagues have gotten sort of 'ghettoized' over the years. We need to flip that around," Farrey said. "We need to embrace those kids and those experiences as real hockey experiences, and then try to make them real quality experiences through better coaching and a more equitable allocation of ice time."

He points to Minnesota's community-based model as a program that makes every player and parent, regardless of what level they are involved, feel like they're part of the hockey community. And by doing so they have created a deeper talent pool from which to draw from.

"It's no surprise why they have the best participation numbers and still produce the best players in the country," Farrey said.

But it's not just in the State of Hockey where this model is successful. Along the shores of Lake Erie, in the town of Amherst, N.Y., house league hockey has long been woven into the fabric of the community.
"If you want to grow the game you not only have to get people into the game, you have to keep them in the game. You do that by making it affordable and creating something that fits their schedule," said Ed Guzdek, a vice president in the Amherst Youth Hockey Association.

"These [house league] kids still love the game. We're just giving them a place to go play and have fun. That's what we've been successful at."

Across the Empire State, there are similar results on a smaller scale at Schenectady Youth Hockey, where their house program has been giving kids a place to play for more than a decade.

The program runs from late October through February at a lower cost and less of a time commitment than its travel program. The emphasis is on developing skills in a fun and friendly environment.

"It's just the right fit for some people," said Adam Brinker, who brings years of college and Junior hockey coaching experience to the program.

"Some of these kids have come out of the Mite program and they realize that if they're  going to play at the next level they have three practices a week plus whatever the game schedule is. That adds up pretty quickly. That's why a program like this is pretty attractive to some families."

That flexibility allowed Amy Willbrant's son, Graham, and daughter, Leah, to remain involved in hockey even as they participated in other sports.

"It was perfect for us. They both really loved playing, but they still had a life outside of hockey," Willbrant said.

"It did make it easier for us to allow them to continue playing hockey for another couple of years because it was so manageable. And they still love the sport to this day."

Changing the perception starts with tearing down the walls between house and travel hockey that pigeonhole players into one side of the game or the other.

"If you want to play house league hockey, that doesn't mean you should be out of the elite hockey system when you're 12 or 13 years old," said Herr, who grew up playing recreational hockey in Bear Mountain, N.Y., before eventually earning a scholarship to play at the University of Michigan and then in the NHL.
"And if you play travel hockey you should be able to get on and off this train any time you want. Right now people feel like you're on the train of elite hockey and there's no way to get off of it. They're almost trapped. The only way out is to give up the sport altogether."

Stemming that tide is where the partnership between all the stakeholders of the game comes into play. At the end of the day, the experiences gained at any level of the game have lasting benefits on players and parents alike.

"It's the competition, it's the camaraderie with your teammates, it's the locker room experience. For 99 percent of people who play the game, they talk about the friendships they've made and the experiences they had," Herr said. "I compare it to men's leagues. Most of them aren't traveling from Boston to California to play. You drive to the local rink, you throw your skates on and you play."

Losing that us versus them attitude that has existed for too long in too many local associations would be a step in the right direction.

"That's why when we talk about our travel program, the conversation doesn't exist without also talking about our house program. We tell our folks, we're all one organization."

And that philosophy is a big reason why youth hockey is alive and well in Amherst, N.Y.

"I get phone calls all the time from people who say that their kid wants to play hockey," Guzdek said. "I always tell them, 'I've got a spot for your child.'"